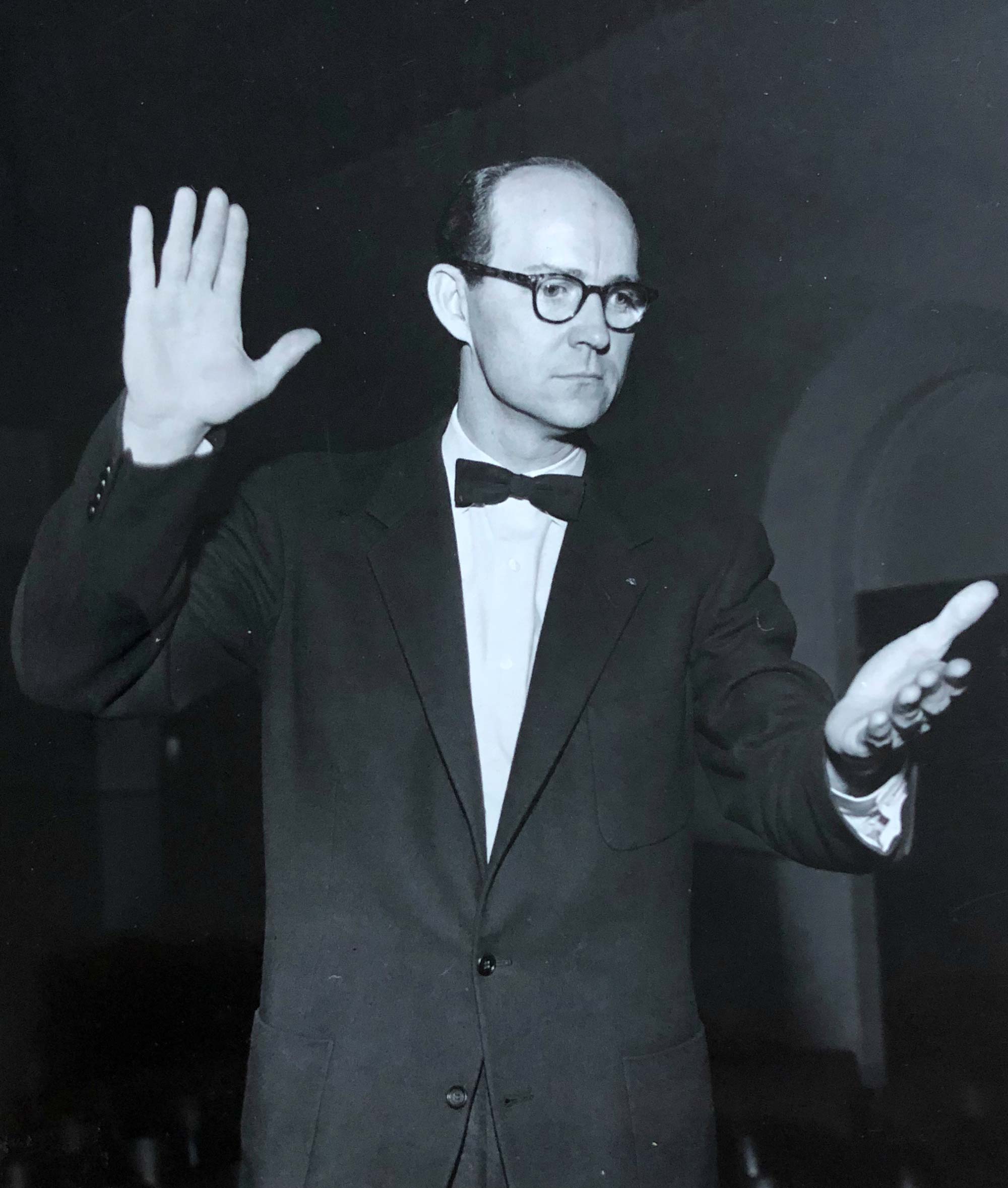 “He changed my life.”

It is a refrain that Pat Brady has heard throughout her life as former students of her father, Andrew Brady, would recount how he helped, encouraged and inspired them during his 32 years (1944-1976) as orchestra and band director at Western Hills High School. Many of the professional musicians who played in his summer park concert bands share that sentiment. He was the consummate musician: a trumpeter, pianist, conductor, composer, arranger, but foremost, a teacher.

From the moment he entered the world on January 3, 1915, in Jonesboro, Arkansas, Andy Brady was surrounded by music. His father, Lawrence, was from Ireland and a fiddler who made sure that all seven of his children played multiple instruments. For Andy, the youngest, that meant trumpet, violin and piano. Brady family ensembles played in church and community events throughout Andy’s childhood, and somewhere along the way, he began writing and arranging his own music.

Although Andy seemed destined for a musical career, he took a two-year detour after graduating from high school and entered Arkansas State University as a journalism major. Destiny can only be denied so long and when a family friend told him about the Conservatory of Music in Cincinnati (one of the institutions that would later merge with the College of Music and eventually the University of Cincinnati), he applied, graduating with a bachelor’s in music education in 1938. And he decided to stay in Cincinnati. No doubt a big part of that decision was meeting his wife of 60 years, Frances Feltz, on a tennis court. They married in 1941 and had two daughters, Susan and Patricia.

For those first few years after college, Andy taught music at Rothenberg Elementary School in Over-the-Rhine. When the music director’s position opened at Western Hills High School, Andy saw the opportunity he’d been waiting for. Luckily, for the legions of students he would influence during the next three decades, he got the job. “Teaching there was the love his life as far as his musical careers went,” daughter Pat says. His concerts, annual Bandwagon variety shows and football halftime shows were legendary. Each week he would create an entirely new half-time show. And according to daughter, Susan, every week, she and sister Pat would be bundled up by their mother Frances and arrive at the games just in time for the half-time show. “As soon as it was over, we’d leave,” Susan says, laughing.

Local attorney Eric Bruestle (French horn) and his brother, Doug (tuba and cello) a retired high school music director, played in Andy’s high school ensembles and later in his professional concert bands. Doug echoes the feelings of numerous teachers and performers who credit Andy with their career choices. “He certainly was the reason I became a music teacher,” Doug says. “He was a local icon among band directors.” So what was it about Andy that had such an impact on so many?

Family and former students-turned friends use a lot of admirable words to describe his personality: Kind, wise, gentle, even-tempered (even on the podium), dignified, classy with the underpinning of a wry sense of humor. Musically, he was known as a creative workhorse, often writing his own arrangements or original compositions over a weekend for his bands and orchestra when he wasn’t satisfied with what was available.

He also had a reputation of doing whatever was necessary to ensure a student’s success, whether that was making certain that an individual chose the right instrument; writing a letter of recommendation and always going the extra mile to make sure that his bands, orchestra and ensembles would deliver an excellent performance at contests and concerts. The long list of awards and accolades he and his musical groups consistently earned are a tangible testament to his work ethic. Several years after retirement, the Western Hills Alumni Foundation honored his legacy with the naming of the Andy Brady Band Room.

Andy’s musical life wasn’t confined to school, however. Daughter Pat says there was always music in their lives. “When he wasn’t working around the house or eating, he was usually playing the piano.” As a working musician, Andy played in area jazz bands on the weekends and for years, was a regular in the Beverly Hills Supper Club band.

His concerts in Hamilton County and Cincinnati Parks were a fixture of summer for decades. Funded by several trust funds devoted to free public concerts, Andy’s bands were filled with some of the area’s best professional musicians. Trombonist Dave Haldeman remembers Andy’s conducting style as “clarity on the podium, not something you always got from other directors.” Somehow, he found the time to conduct a youth orchestra sponsored by the Cheviot Westwood Kiwanis Club during those summer breaks as well.

Andy Brady was dedicated to the idea that music should be a part of everyone’s life.

Nothing illustrates his commitment to that ideal more than a story shared by former student Eric Bruestle, who also managed Andy’s professional concert bands after high school: “During the summers, he volunteered to give adults lessons who had never played an instrument or if they had, give them lessons on another instrument. That was pretty amazing.” Indeed.

Andy and Frances lived the last few years of their lives at what is known today as Twin Towers Senior Living Community. Frances died in 2001, and Andy followed January 10, 2004, a week after his 89th birthday.

As long as he was physically able, several times a day, Andy would head to the large public space at Twin Towers where he would sit down at the piano and play for residents and visitors, never losing sight of his mantra: “Music should be a part of everyone’s life.”

Sign up for our email newsletter to be the first to know about new concerts!